From ducted to ductless to downdraft systems, not all kitchen ventilation is created equal.

If you are updating your kitchen, you are probably wondering whether you need a range hood. 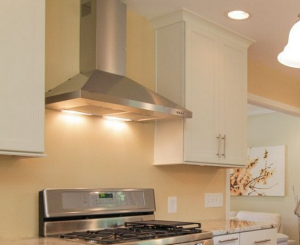 Most residential building codes do not require a range hood above a stove or cook top, but you’d be wise to ensure your locale is not the exception. Even if it’s not legally required, you should think long and hard before forgoing a hood altogether.

Range hoods are designed to collect airborne grease, moisture and cooking odors, but not all hoods are created equally. Here’s a quick rundown of the kitchen ventilation systems you’ll want to consider:

If you cook much at all, you’ll likely want a hood that vents to the outdoors. A ducted hood actually moves the polluted air to the outside, getting rid of all forms of air pollution caused by cooking. Fresh air is drawn in from the outside, keeping the kitchen air clean, and preventing cooking odors and even grease particles from spreading throughout the house — especially all over your kitchen cabinets.

Ducting is simplest if your range and hood sit along an exterior wall; the duct can run out the rear of the hood and through the house wall. For a range placed against an interior wall, the duct can go up into the soffit above the cabinets or between ceiling joists, and then out through the nearest exterior wall. Regardless of where you run the duct, it is important that it runs all the way to the outdoors; a ventilation duct should never end inside an attic or other enclosed space.

Unlike a ducted range hood, which vents air to the outdoors, a ductless range hood consists of a fan with a charcoal filter that sucks up grease particles, odors and smoke. Air is filtered through the charcoal and re-circulated into the kitchen. The hood’s filters need to be cleaned or replaced regularly.

Downdraft systems typically are built-in as part of the range; they’re often located on the stove top near the burners. The other style of downdraft system is the pop-up type. This vent remains flush with the cooking surface until you need it; with the push of a button, the vent will rise 8 to 10 inches above the cooking surface. Done cooking? Push a button and it disappears again.

Both types of downdraft units use fans to pull air through a filter, into ductwork that runs beneath the floor or above the cabinets and – generally – outdoors. Their camouflage quality makes downdraft vents ideal for use in kitchen islands and peninsulas.